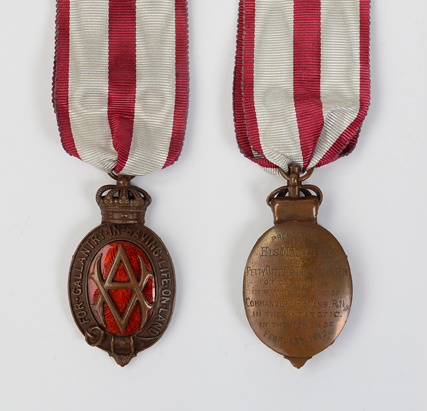 Lt Teddy Evans, Tom Crean and William Lashly, the final supporting team for the Polar party in 1912, were 238 miles from home when Evans began to suffer from scurvy. His condition deteriorated until, 100 miles out, he could no longer stand.

Crean and Lashly refused to leave him and pulled him on the sledge to within 35 miles of Hut Point. While Lashly stayed behind to care for the dying Evans, Crean set out alone on an 18 hour non-stop march to reach help at the hut. Evans was saved and subsequently Tom Crean and William Lashly were each awarded the Albert Medal.

Evans never forgot the two men who had, he later wrote, “hearts of lions”, and he stayed in touch with them for the rest of his life. (Photo and text courtesy of Kerry County Museum) 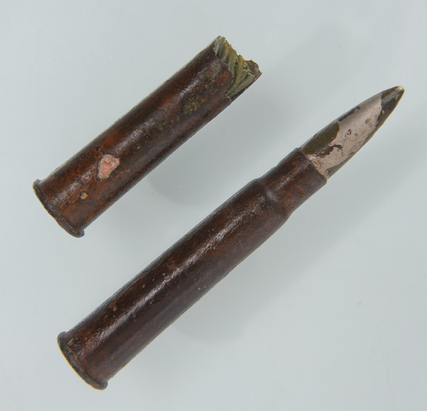 Ammunition from the Aud (Courtesy of Kerry County Museum)

These cartridges were recovered from the Aud shipwreck. Initial research indicates that the .30 calibre rounds were designed for use in the bolt-action Mosin-Nagant M91, a Russian made rifle, and the most numerous cartridge type found in the Aud’s cargo. The story of the Aud is a significant part of the 1916 Rising story.

A German gun-running ship, it arrived in Tralee Bay during Easter week 1916 laden with a cargo of arms. The ship was due to liaise with Roger Casement and men on-shore, but nobody met the ship. Ultimately it was scuttled in Cork harbour. The arms did not make it into the hands of the rebels. However, the ship’s cargo was used as evidence against Casement in his trial for treason. The outcome of this trial resulted in his death. (Photo and text courtesy of Kerry County Museum)

The cartridges were conserved in autumn 2013 with funding from the Heritage Council. 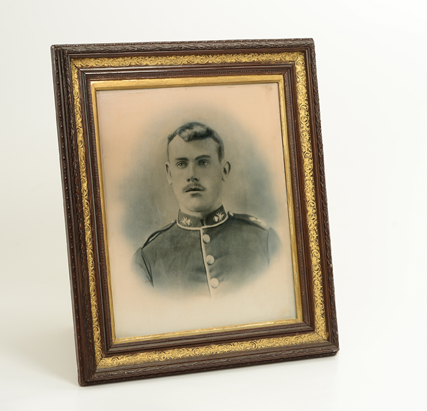 The portrait and frame were conserved in Spring 2014 with funding from the Heritage Council. 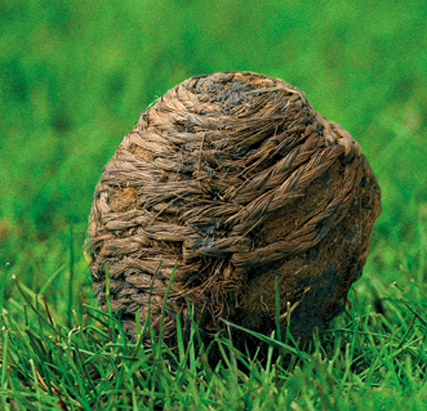 This was one of the first objects donated to Kerry County Museum in 1992. It was found by Larry Keane while cutting turf by hand on the bog in Ahaneboy, near Knocknagoshel.

Balls like this were made from a centre of matted cow hair and an interlaced cover of the plaited tail hair of a horse. The finished ball was lighter than the modern day sliotar – a sliotar today weighs between 110 and 120 grams, while the hair ball is around 50 grams.

This would have made the game slower than today’s hurling. There are 14 hair hurling balls in Irish museum collections, and the oldest dates from a period between 1157 and 1227, and the youngest is between 1663 and 1683. That in Kerry County Museum’s collection is the third oldest in the Country, dating from a period between 1278 and 1309. (Photo and text courtesy of Kerry County Museum) 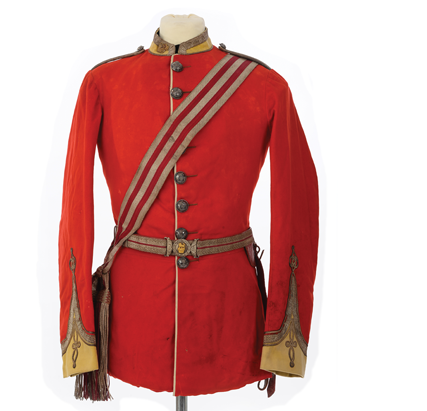 This style of uniform would have been worn by officers in the Kerry Militia from 1868 to 1881.

It had come in to their Museum after it was discovered in an attic, and once they had pieced together the connection to Kerry they offered to send it back to Tralee. (Photo and text courtesy of Kerry County Museum) 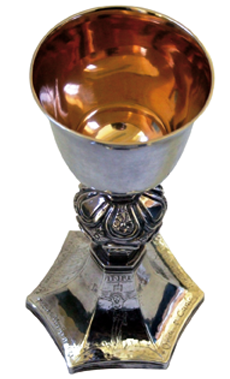 The Moriarty Chalice is a grim reminder of a dark chapter in Kerry’s history. It was presented to the Tralee Dominicans in 1651, at the height of the Cromwellian conquest of Ireland, a very bleak and dangerous time for Catholics.

Catholic clergy were expelled from the country and those who went into hiding risked execution if found. Mass could only be held at secret locations. In 1653 the Prior of the Tralee Dominicans, Thaddeus Moriarty, was captured, tortured and murdered by Cromwell’s troops.

The Chalice was thought lost but astonishingly found its way back to Tralee 200 years later. Kerry County Museum have it on loan from the Dominicans, who still use it for special masses. (Photo and text courtesy of Kerry County Museum)

This website uses cookies to improve your experience while you navigate through the website. Out of these cookies, the cookies that are categorized as necessary are stored on your browser as they are essential for the working of basic functionalities of the website. We also use third-party cookies that help us analyze and understand how you use this website. These cookies will be stored in your browser only with your consent. You also have the option to opt-out of these cookies. But opting out of some of these cookies may have an effect on your browsing experience.
Necessary Always Enabled
Necessary cookies are absolutely essential for the website to function properly. This category only includes cookies that ensures basic functionalities and security features of the website. These cookies do not store any personal information.
Non-necessary
Any cookies that may not be particularly necessary for the website to function and is used specifically to collect user personal data via analytics, ads, other embedded contents are termed as non-necessary cookies. It is mandatory to procure user consent prior to running these cookies on your website.
SAVE & ACCEPT